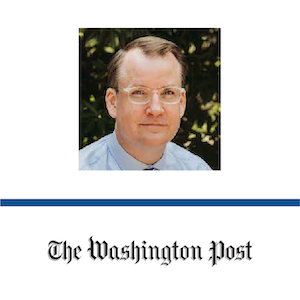 DETAILS
Correct: There have been over a million COVID-19 deaths in the U.S. since the start of the pandemic. An analysis of the vaccination rollout found that all adults being vaccinated by June 2021 would have prevented an estimated 234,000 deaths up to March 2022.
KEY TAKE AWAY

The COVID-19 vaccines have been shown in clinical trials and real-world data to be highly effective at preventing deaths. Even after all adults became eligible for vaccines, about 40% of Americans remained unvaccinated, falling to 22% by February 2022. These unvaccinated people accounted for the vast majority of deaths in the months that followed. If all these adults had been vaccinated, an estimated 234,000 lives could have been saved by March 2022, representing about a quarter of all COVID-19 deaths up to that point.

Since the COVID-19 vaccines were first developed, countries around the world have worked to procure enough supplies and encourage their populations to get vaccinated. Despite an early surge in uptake, the U.S. soon fell behind other G7 and high-income countries. Figure 1 shows the vaccinated proportion of the population in such countries, with the U.S. being a clear outlier. 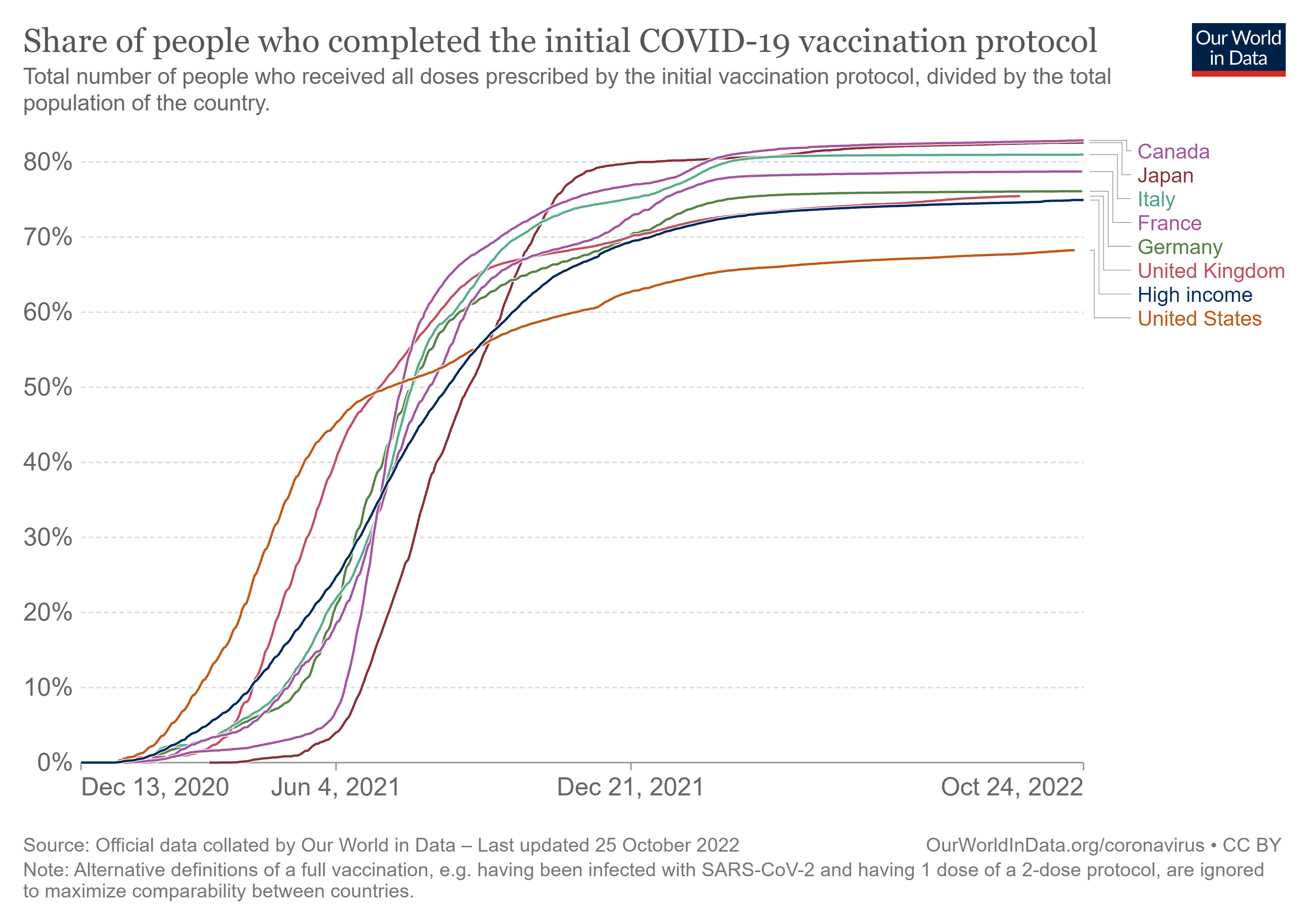 Figure 1. Graph showing the increase in the fully vaccinated proportion of the population across G7 countries. Source: Our World in Data.

In April 2022, a report published by non-profit funders of healthcare analysis calculated that vaccination could have prevented a quarter of COVID-19 deaths in the U.S. This claim was further publicized in an article in the Washington Post. This review will explain how this figure was determined and assess the accuracy of the coverage.

Over a million COVID-19 deaths have been recorded in the U.S.

Another way to measure the deaths due to COVID-19 is to look at the excess deaths in the population. This approach compares the total number of deaths during the pandemic to data from previous years to see if more people have died.

The graph in Figure 2 below shows a sharp increase in deaths starting in March 2020. This goes far beyond the upper limit of expected deaths based on pre-pandemic years, as shown by the red line. For most of the period since, an unusually large number of people have died. In particular, there are spikes that coincide with waves of high COVID-19 transmission and the arrival of new variants. 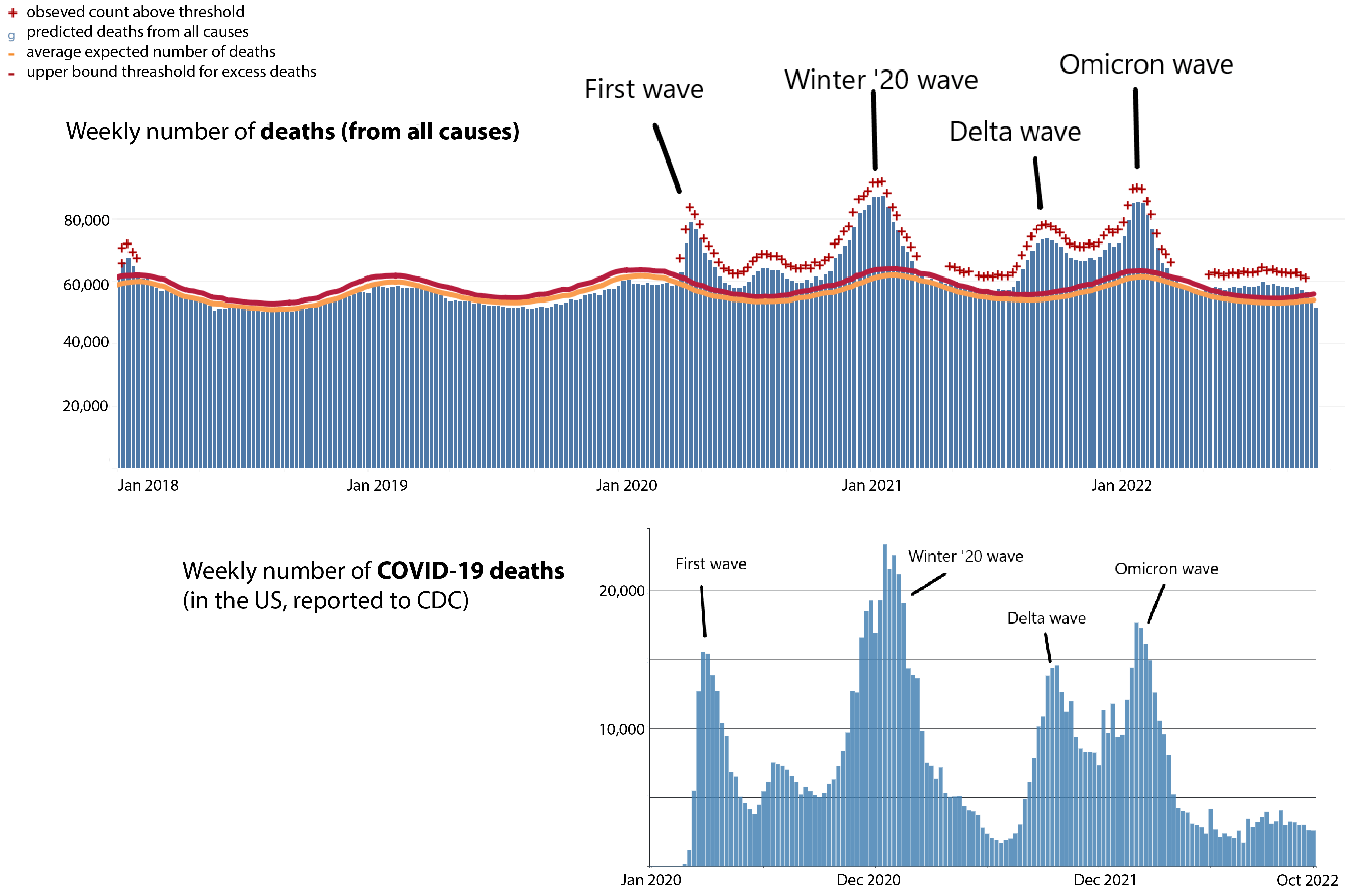 Figure 2. Top: Graph showing excess deaths in the U.S. from 1 January 2018. The blue bars represent deaths from all causes. The yellow and red lines represent the average expected number of deaths and the upper limit of what would be normally expected, respectively. Source: U.S. CDC. Bottom: Weekly COVID-19 deaths recorded in the U.S. Source: U.S. CDC. Labels added to waves by Health Feedback.

There were a total of 1,208,261 excess deaths between 2 January 2020 and 21 October 2022. While this figure is larger than the official COVID-19 death toll, it’s important to keep in mind that not all these deaths can be directly attributed to COVID-19. In light of this caveat, the excess death figure corroborates the official COVID-19 death toll.

The COVID-19 vaccines were introduced in the U.S. in December 2020 and became available to all adults in April 2021. These vaccines were tested on thousands of volunteers in clinical trials, which showed that they were highly effective in reducing the risk of symptomatic COVID-19.

After the vaccines were introduced, researchers continued to measure their effectiveness in the real world. Based on these observations, the CDC estimated that unvaccinated people have about six times the risk of dying from COVID-19 compared to vaccinated individuals as of August 2022. However, this figure has varied over time depending on the spread of the virus and the evolution of new variants.

As Figure 3 below shows, while the majority of the population was vaccinated during this period (up to 78% by February 2022), vaccinated people only accounted for a small proportion of COVID-19 deaths. While the vaccines provide a strong level of protection, they aren’t expected to be 100% effective. In addition, the vaccinated population tends to be older and therefore at a higher underlying risk of COVID-19 death. 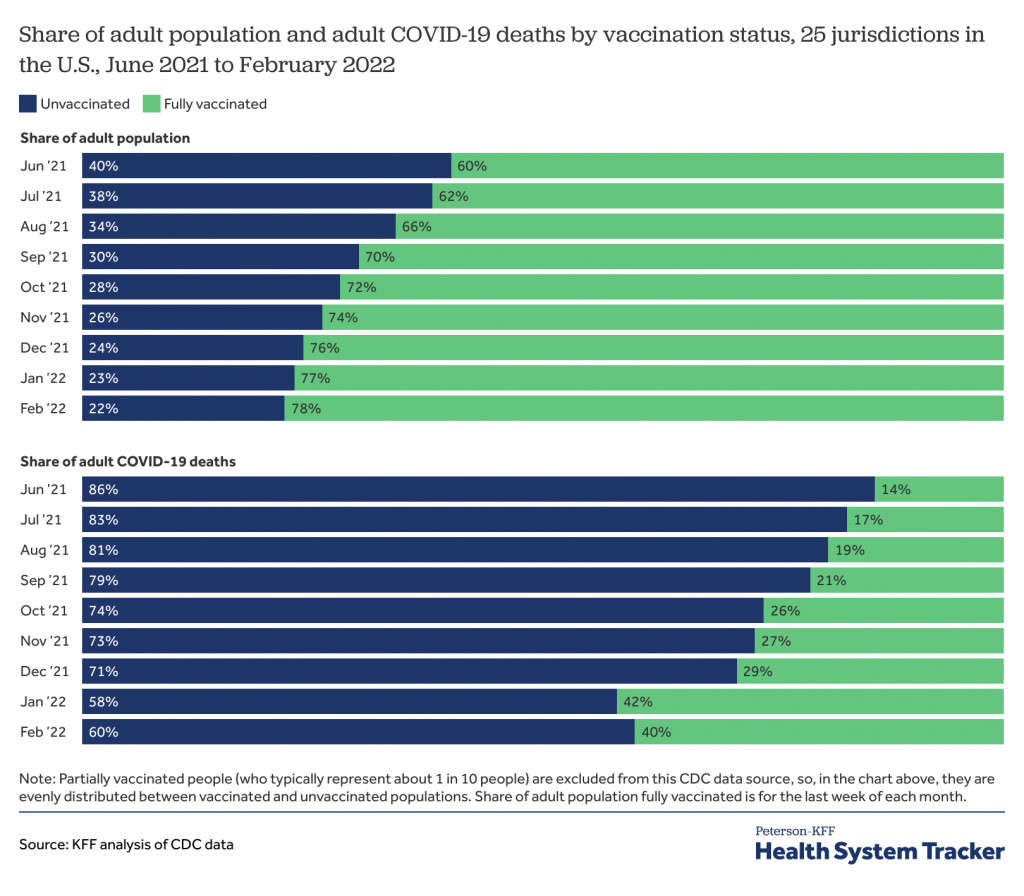 Figure 3. Data showing the share of the adult population who are vaccinated over time and the share of adult deaths by vaccination status. As the number of people vaccinated grew, so did their proportion of the deaths. However, unvaccinated people were disproportionately more likely to die from COVID-19. Source: Peterson-KFF Health System Tracker.

Unvaccinated people have a significantly higher risk of dying from COVID-19. As shown in Figure 4 below, this changes over time depending on the level of virus transmission in the community.

Figure 4. Graph showing the death rates among adults aged 50+ in the U.S. by vaccination status. While the rates vary over time, unvaccinated people were disproportionately more likely to die from COVID-19. Source: Our World in Data.

In April 2022, the Peterson Center on Healthcare and the Kaiser Family Foundation, both non-profit organizations that fund the analysis of healthcare policy, published a report analyzing public data to determine how many deaths could have been prevented if all adults in the U.S. had been fully vaccinated. This concluded that an estimated 234,000 lives could have been saved. Both the report and the Washington Post’s coverage highlighted that this represented a quarter of COVID-19 deaths up to March 2022.

The report’s authors concluded that 270,000 adult COVID-19 deaths occurred among unvaccinated adults in the U.S. between June 2021 and March 2022. To estimate the proportion of these deaths that were preventable, they applied a vaccine effectiveness against death of 91% for June through December 2021 and 79% for January through March 2022.

The vaccine effectiveness estimates used in the report come from CDC studies. Two studies estimated that effectiveness against death was 91%, 94%, and 92% during different periods in 2021[1,2]. The report’s authors used the lowest of these estimates. Another study from 26 December 2021 to 24 January 2022, during the Omicron wave, estimated an effectiveness of 79% at preventing ventilator support or in-hospital death[3].

Based on these estimates for vaccine effectiveness against death, the report estimated that 234,000 lives could have been saved with COVID-19 vaccines. This represents 60% of the 389,000 COVID-19 deaths during the period studied. These also accounted for 24% of the officially recorded COVID-19 deaths from the start of the pandemic to March 2022.

Partially vaccinated people were excluded from the CDC data. These accounted for about one in 10 people during the period studied. The report equally distributed deaths in this group between vaccinated and unvaccinated adults.

The report didn’t analyze the effect of booster vaccine doses. However, the authors noted that vaccine effectiveness increases with a booster and therefore even more deaths could have been prevented if the population had been boosted as well as vaccinated. A CDC study estimated that three doses of an mRNA vaccine (two for the primary series and one booster) provided 94% protection against ventilation or in-hospital death during the Omicron wave, significantly higher than the 79% protection from just two doses[3].

Another analysis by researchers at Brown University and Microsoft estimated that 318,000 deaths could have been prevented with increased vaccination[4]. This figure is higher than the Peterson Center report as it included data up to the end of April 2022 and accounted for the impact of booster vaccines.

In addition, the two analyses used different methods for reaching a 100% vaccination rate. The Peterson report was based on all adults being fully vaccinated by June 2021, while the Brown study calculated what would happen if the peak daily rate of vaccinations per state was sustained until they reached 100% coverage.

The assumptions behind the report are reasonable

The Peterson Center report made a number of assumptions in their calculations based on the limitations of the data available:

In all, the assumptions appear to be reasonable and wouldn’t significantly distort the end result.

In summary, the evidence shows that the COVID-19 vaccines significantly reduce the risk of deaths related to the disease. Even after all adults became eligible for vaccines, roughly three in 10 Americans remained unvaccinated. These unvaccinated people accounted for the vast majority of deaths in the months that followed. If all these adults had been vaccinated, an estimated 234,000 lives could have been saved by the end of March 2022. This represented nearly a quarter of recorded deaths, as the Washington Post correctly reported.