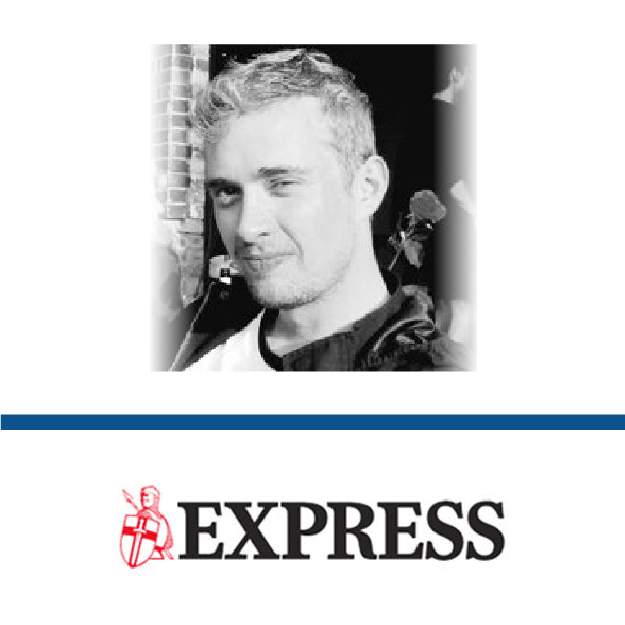 DETAILS
Factually inaccurate: The headline and article misrepresent the solar activity forecast presented by US science agencies.
Misunderstanding of science: A solar minimum would not cause cold weather around the world.
KEY TAKE AWAY

This headline (and the article below it, as scientists who reviewed the article detail below) misrepresents a NOAA press release by inventing a claim that appears nowhere in that source—the idea that a coming minimum in the Sun's natural 11-year cycle of solar activity will cause cold weather around the world. There is no evidence supporting this.

Rasmus Benestad, Senior scientist, The Norwegian Meteorological institute:
The NOAA release says nothing about Earth’s weather or climate in the normal sense, but only discusses “space weather”, which is about solar conditions and effects on the upper atmosphere. Hence, the headline of “Cold weather to grip WORLD as solar minimum to DEEPEN, NASA says” is incorrect and strongly misleading.The first paragraph (“A DEEP solar minimum is set to bring a prolonged period of colder temperatures across the globe, NASA has predicted”) is also wrong, as the article says that the next solar cycle is expected to be similar to the preceding one and that they don’t expect a new sort of Maunder Minimum. Moreover, the article says that the steady decline in the solar cycle amplitude has come to an end.

The statement that the Sun emits less heat due to a decrease in magnetic waves does not make sense. The reason why the solar output varies with the solar cycle is the presence of flares that accompany the sunspots. The sunspot cycle is connected to the Sun’s magnetic field, not waves. On the other hand, light is the same as electromagnetic waves (waves that are partly magnetic). I think the journalist got the physics mixed up.

The cited release says that the decline in solar activity has come to an end, whereas the Express article says it’s going to deepen.

The statement that the global temperature dropped by 1.3°C during the Maunder Minimum (1645-1715) is probably picked from an outlier study that is different from most others. A more credible figure is 0.3°C[1].

Michael Lockwood, Professor of Space Environment Physics, University of Reading:
Firstly, the NASA press release [that this article is based on]: That is reasonable, but there is some academic debate here that is glosses over. It has long been known that there are precursors that can tell you something about the size of the upcoming solar cycle—the level of activity in Earth’s magnetic field during the preceding minimum being the most famous example. We now have a good understanding of that in terms of the long-term variation of the open magnetic flux of the Sun. However, there appears to be a big difference between how predictable the second half of the upcoming solar cycle is (after what is often called the “Gnevyshev gap” that is seen in several solar parameters) compared to the first half. A recent workshop held at ISSI, Bern (The International Space Science Institute) found that although the first half of the cycle is predictable, the second half is much less predictable and indeed, the current solar cycle (numbered 24) is a good example of that. Apart from that, the NASA press release is reasonable and well informed.However, the Express article is a classic example of “spinning” a bizarre narrative out a few wildly exaggerated and misinterpreted facts.

This article peddles the endlessly repeated but wholly incorrect idea that the Maunder minimum gave a period of global low temperatures (misleadingly called the “little ice age” although it was not an ice age of any kind). The article is probably wrong in suggesting that solar activity will be lower than in was in 2007/8, and to relate such a minimum between cycles (lasting at most a year) to the 50-year Maunder minimum (when there were no cycles at all) is, frankly, bizarre.

The statement that the Sun gives off more heat at sunspot maximum is correct. However, the article doesn’t mention that it is very small—only a 0.1% variation. The explanation as “magnetic waves” is meaningless—the lower emission at sunspot minimum is really because there are fewer small magnetic flux tubes called faculae threading the solar surface.

I know of no such experts. It is true that some indicators of the solar cycle will probably go a little lower than they are now over the next year, before solar activity picks up again in cycle 25. However, based on past solar cycles, the Total Solar Irradiance (the total heat and light we get from the Sun) decrease from here to its next minimum will be about 0.01% at the very most, and more likely 0.001%. (See Figure below)

“An international panel of researchers led by NASA and NOAA has released a new prediction for the solar cycle: The current solar minimum is going to deepen, potentially reaching a century-class low in the next year or so.”

The first half is true, but the second half has come from a number of amateur space weather websites and its provenance is not at all clear—it is not in the official panel press release. The “potentially” is a significant caveat. To do that, this minimum would have to be deeper than the last one (between cycles 23 and 24 in 2008/9)—that is “potentially” possible but now appears to be very unlikely indeed.

“The last time a deep solar minimum was in effect was the Maunder minimum, which saw seven decades of freezing weather, began in 1645 and lasted through to 1715, and happened when sunspots were exceedingly rare. During this period, temperatures dropped globally by 1.3 degrees celsius leading to shorter seasons and ultimately food shortages.”

This is so full of nonsense it’s hard to know where to begin. Firstly, the Maunder Minimum was a 50-year period with no solar cycles— not a minimum between cycles. As I said above, the upcoming minimum is VERY unlikely to be deeper than the last one in 2008/9. Most importantly, the Maunder minimum was NOT (repeat NOT) a period of decades of freezing weather. It was a period when Europe had a higher fraction of cold winters but summers were, if anything, warmer in the Maunder minimum (as seen, for example, in the central England Temperature measurements) and paleoclimate data show a longer interval of slightly lower global temperatures (often massively misleadingly called the “little ice age”) which began long before the Maunder minimum and didn’t end until after the Maunder minimum was over. The idea that the Maunder minimum gave periods of unremitting cold is just wrong—it is often quoted but it is totally wrong.

The claimed drop of 1.3°C in the Maunder minimum is a ludicrous figure. The Figure below (from Owens et al paper[2]) shows any drop that could possibly be associated with the Maunder minimum is 0.2 °C (and Owes et al show that is not statistically significant). That minimum was almost 1.3 °C lower than today’s values because of 1.1 °C of anthropogenic greenhouse warming since just before and just after the Maunder minimum. 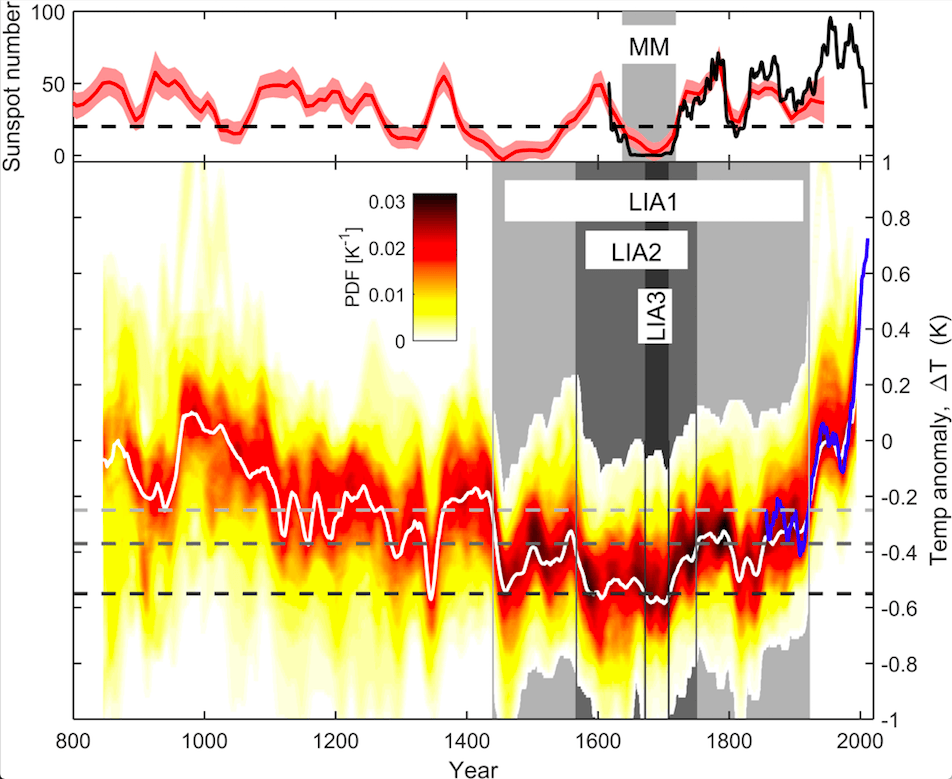 Figure – A comparison of solar activity and northern hemisphere climate from AD 800 to AD 2016. Top: Sunspot number, from direct telescopic observations (black) and reconstructed on the basis of 14C concentrations in tree trunks (red). Bottom: Northern hemisphere temperature anomaly, ΔT, (relative to the 1961–1990 mean) for paleoclimate reconstructions, as presented in the IPCC fifth assessment report. Colours, from white through red, show the probability density function (PDF), while the white line shows the PDF maximum value (or mode). The blue line shows ΔT from the instrumental record (HadCRUT4). (Source)

“Vencore Weather, a meteorological website, said: ‘Low solar activity is known to have consequences on Earth’s weather and climate …. ‘”

I don’t know who Vencore Weather are but that statement is wrong. As I said, it is often repeated but is wrong.

The article appears to be citing NOAA when it says “Space weather and terrestrial weather (the weather we feel at the surface) are influenced by the small changes the Sun undergoes during its solar cycle.” That statement is undoubtedly true about space weather. The statement about terrestrial weather is contentious. There is growing evidence that low solar activity leads to a weaker, more meandering jet stream (almost certainly because UV emissions from the Sun are lower) and this can lead to cold snaps in Europe—but at the same time they cause warmer periods in, for example, Greenland. There is no credible evidence that this leads to a significant drop in global temperatures.

The very top of Earth’s atmosphere (the thermosphere, 250 km up and above) is certainly influenced by solar activity. This is important for factors like orbital decay of satellites but has no implications for surface weather at all. It is a space weather effect not a terrestrial weather effect.

Climate Feedback:
Sensational claims about outbreaks of cold weather caused by solar activity changes appear repeatedly at some outlets despite the lack of past evidence or research supporting this idea. We recently analyzed the spread of a similar story across the web here.

The claims in this Express article are virtually identical to two of their recent articles, and also got repeated by a number of other sites, including Newsflash.one and Climategate.nl.