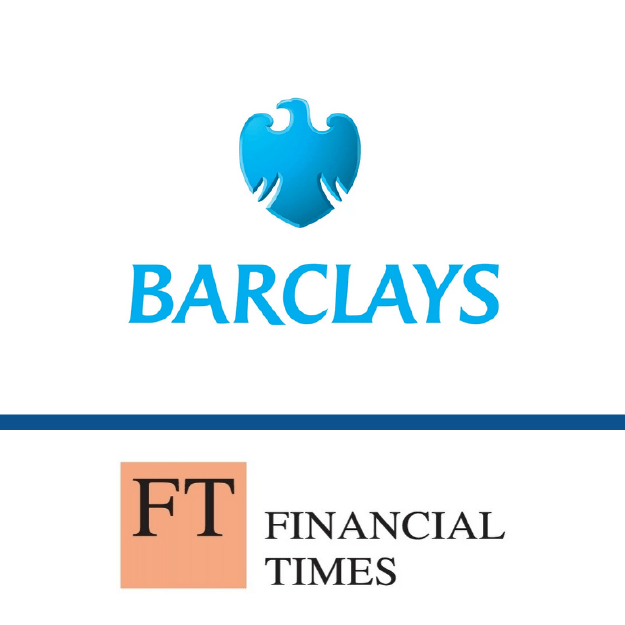 CLAIM
Burping cows are more damaging to the climate than all the cars on this planet.
VERDICT more about the rating framework

DETAILS
Lacks context: This statement can be accurate or inaccurate depending on the timeframe you select. Just considering the next couple decades, it's true, but in the longer-term it is not.
KEY TAKE AWAY

Because methane is a more potent—but much shorter-lived—greenhouse gas than CO2, the timeframe has to be defined for this statement. Methane lasts about a decade before breaking down, while CO2 can stay in the atmosphere for centuries. This means that cows do have a greater impact in the near-term, but are responsible for a smaller amount of warming in the long-term.

FULL CLAIM: Burping cows are more damaging to the climate than all the cars on this planet.

Ilissa Ocko, Climate Scientist, Environmental Defense Fund:
As written, this claim is missing key information that would make it accurate. It is in need of a timescale over which the climate impacts of “burping cows” are compared to the climate impacts of passenger vehicles. If the statement specified that “burping cows are more damaging to the climate in the near-term (over the following 20 years) than all the cars on this planet,” the statement would be accurate. If we look instead at long-term climate impacts (over the following 100 years) from today’s burping cows versus passenger vehicles, then cars would be twice as “damaging.”

The reason that a timescale is needed is because these two sectors emit two different greenhouse gases. “Burping” cows emit methane, whereas passenger vehicles mainly emit carbon dioxide. Although both are greenhouse gases, they have vastly different properties: methane can trap around 100 times more heat than CO2, pound for pound, but because it only lasts for around a decade in the atmosphere, the climate impacts of emissions are short-lived. CO2, on the other hand, can impact the climate for centuries to come, as a large fraction of emissions remain in the atmosphere for thousands of years. Therefore, comparing climate impacts is not straightforward, and a simple metric called Global Warming Potential (GWP) is often employed to convert the methane emissions to the amount of CO2 that would have the same warming impact (using radiative forcing as a proxy) over a specified (and arbitrary) time horizon. 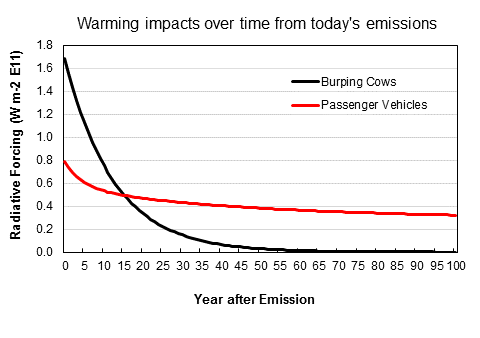 We can also avoid GWP altogether, and look at the warming impacts over time (in terms of radiative forcing) from present-day emissions of burping cows and passenger vehicles (see figure below). This takes into account the decay rates of methane and CO2 in the atmosphere, and shows that burping cows have a larger climate impact in the near-term but a negligible impact after 50 years. Note that the GWP/CO2e metrics aggregate these warming impacts over 20 and 100 years.

Steven Smith, Senior Scientist, JGCRI - Pacific Northwest National Laboratory &amp; University of Maryland:
The short answer is that this statement looks to be true, but it depends if you’re looking short-term or long-term. This matters quite a bit when comparing a long lived greenhouse gas (CO2) with a short-lived one (CH4):

Comparing on a near-term basis (20-year time horizon) CH4 from enteric fermentation has more than double the impact on climate of CO2 from light-duty vehicles.

Comparing on a longer-term basis (100-year time horizon), the two are comparable.

(Also, the relative importance of cars vs. cows has been increasing over time as vehicle fuel use is increasing faster than livestock populations.)

Emissions compared by using 20- and 100-year Global Warming Potentials (GWPs), which integrate the forcing impact from an impulse emission over time (see above figure).