CLAIM
'Global warming' is a myth — so say 80 graphs from 58 peer-reviewed scientific papers published in 2017.
VERDICT more about the rating framework

DETAILS
Misrepresents source : Every study author who responded explained that their work did not support the assertion that "global warming' is a myth". Read more in a full evaluation of this article...
KEY TAKE AWAY

These studies of past climate do not challenge the well-researched fact that human activities are responsible for climate change, as many of the scientists behind the studies have confirmed.

FULL CLAIM: 'Global warming' is a myth — so say 80 graphs from 58 peer-reviewed scientific papers published in 2017.

Patrick Brown, Postdoctoral Research Scientist, Carnegie Institution for Science:
These studies do not make this claim. Most of them are about regional (not global) temperature variations of the distant past. They generally make no claims regarding the causes of global warming over the most recent several decades nor do they make any claims about the amount of warming expected as we continue to increase greenhouse gas concentrations.

Peter Neff, Postdoctoral research associate, University of Washington:
This false statement is based on a list of figures taken completely out of context. For instance, No Tricks Zone [the blog Breitbart is using as a source] takes a figure from Markle et al., (2017)1 and assumes the x-axis refers to years before present. With this incorrect interpretation, it seems as though ocean temperature anomalies are very low at year 0. However, these plots show the result of simulations of idealized Dansgaard-Oeschger or Antarctic Isotope Maximum events in a general circulation model. Year 0 is simply the beginning of the simulated event and is not displaying actual modern sea surface temperature data (i.e. year 0 is not today, 0 years before present).
Not only is this a red herring, it is a completely misinterpreted red herring.
They also repeat the favorite Antarctic cooling cherry, taking (and altering) a figure from Mayewski et al., (2017)2 which shows Antarctic-wide climate reanalysis temperature data. As a continent (larger than the US lower-48), Antarctica is not warming. This is because much of high, dry East Antarctica is not warming. However, important areas of Antarctica, including West Antarctica which likely would show about a 0.2ºC per decade warming trend over the reanalysis period (from 1979 to present, since satellites have given good data coverage). Climate is incredibly variable around Antarctica, and also through time (large interannual variability). This is well studied, but if you only look at one graph rather than reading the research papers you will not be aware of this.

Tyler Jones, Research Associate, University of Colorado
The West Antarctica temperature plot that was pulled from my 2017 paper is very low resolution, and does not resolve the most recent few 100 yrs. We know from other studies that West Antarctica is currently warming faster than almost any other place on Earth. Furthermore, my paper has nothing to do with global warming or human activities. In fact, I only focus on time periods well before the Industrial Revolution. It is clear that global warming is caused predominantly by human activity.

Belinda Dechnik, The University of Sydney
My data does discuss sea surface temperature in the Great Barrier Reef being slightly warmer than present during the mid-Holocene in response to natural climate variability. However, I in no way deny that the current climate is warming, and that anthropogenic effects are proving very detrimental, particularly to reef systems. This article has misunderstood my findings and in no way supports my view on climate change. I am very disturbed indeed that these people have used my article in such a way to try and discredit the serious effects of man-made climate change.

Nathan Steiger, Postdoctoral Fellow, Columbia University
The blog post [that the Breitbart article is based on] maliciously tampered with figures from my paper, removing lines from the figures. My paper is just not relevant to the arguments about global warming.

Yair Rosenthal, Professor, Rutgers University
The data were taken out of context. In fact a previous article (Rosenthal et al., 20013) made the argument that the current warming, as measured by the increase in Ocean Heat Content (OHC), is a reversal of the long-term cooling trend in the preceding centuries and the rate of heat gain is substantially higher than recorded in the past. If anything, these data support global warming as manifested by the recent increase in OHC.

Bradley Markle, PhD Candidate, University of Washington
My study, and almost all I saw mentioned in the blog post, are studies of climate change in the past. My study investigates connections between different parts of the climate system during climate events that happened over 10,000 years ago. Studying climate change in the past can give context to recent climate changes. However, my study in no way investigates or tries to attribute the causes of recent climate change. It does not deal with human influences on climate.
I do not argue that “global warming… is a fake artefact [sic]”. The overwhelming scientific evidence is that the climate is currently changing and that human influences, primarily releasing CO2 into the atmosphere, have a significant impact. Though, again, this is not at all addressed in my study, nor any of the ones quoted that I recognized (though I did not read them all).

The blog post and Breitbart article are both misleading and inaccurate, on several levels.

David Reynolds, Postdoctoral Research Associate, Cardiff University (and co-authors)
The article uses Figure 11 from Reynolds et al., 2017 without displaying the figure caption. The caption for this figure clearly states that the data shown have been detrended using a simple linear function in order to highlight the high-frequency (sub-centennial) mean annual sea surface temperature (SST) anomalies. This means we have statistically removed the long-term trend, i.e., the 20th century warming signal. The long-term trend was removed from the observational SST data as the particular proxy data being used for comparison, the marine bivalve growth increment width (GIW), does not record the low frequency change, such as the long-term warming trend. The reason the GIW chronology doesn’t record the long-term trend is because there are changes in the growth rates of the bivalves as they age (older=slower=thinner GIW). The standard procedure (e.g. Butler et al., 2009) for taking these so-called “ontogenetic effects” into account removes the ability of the GIW proxy to record long-term trends while retaining the signal of high-frequency variability. Looking at the non-detrended observational SST data (Fig 1) clearly shows there is a long-term warming trend over the 20th century in northeast Atlantic sea surface temperatures. 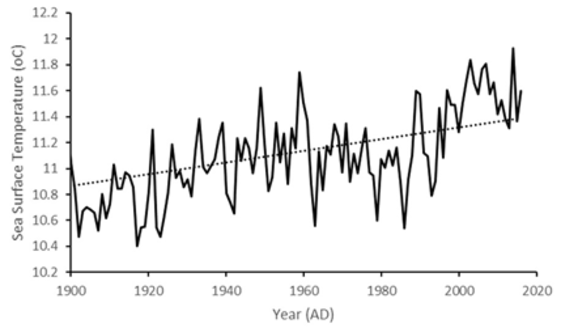 Fig 1 — The black line shows mean annual sea surface temperatures over the North East Atlantic (50-60oN by 10-0oW). The dashed black line shows the linear trend over the 20th century. The data shown here are the raw data that were then linear detrended for use in Reynolds et al., 2017 Fig 11.

Matthias Thienemann, PhD Candidate, University of Cologne
I do not agree with the Breitbart article that my study provides evidence against modern climate change caused by human activities. My paper deals with climate and environmental change on a larger timescale and does not allow any conclusions about current global warming.

Florin Pendea, Associate Professor, Lakehead University Orillia
The claim that our paper Pendea et al. (2017) published in the Quaternary Science Reviews brings support to the notion that anthropogenic global warming doesn’t exist is completely false. The story circulated by Breitbart news represents a gross misunderstanding of the data presented in our paper. The data we present constitutes a record of millennial-scale environmental change in the North Pacific that has no relevance to the discussion around the global warming trend observed during the last 150 years in a vast number of environmental archives around the world.